The Crowds Found Her Udderly Fascinating

From an article by Diana and John Spencer 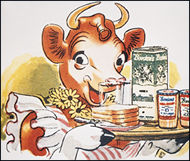 She may have come from a small hometown, but in 1945 she was better known than the Secretary of State or even Albert Einstein. She was Elsie the Cow, she came from Elm Hill Farm in Brookfield, and fame took her to the 1939 New York World's Fair, around the country on a whirlwind tour, and even to the glitter and glamour of Hollywood.

Her real name was "You'll Do Lobelia," and she was one of 20 bovine beauties from around the counrty selected to represent the Bordon Company at the 1939 Worlds Fair by standing atop a revolving platform dubbed the "rotolactor."

It didn't take crowds long to single out big brown-eyed Lobelia, who wiggled her hips, swished her tail, and flicked her long, upturned eyelashes in langorous fashion, as the embodiment of the cartoon cow Borden has been using in its advertisements and product labels.

Lobelia was so popular as Elsie, Borden decided to give her a boudoir and a cross-country tour. Traveling by first class on train or chartered airplane, Elsie toured America like a celebrity, receiving the keys to dozens of cities and holding audience from her four- poster canopied bed. 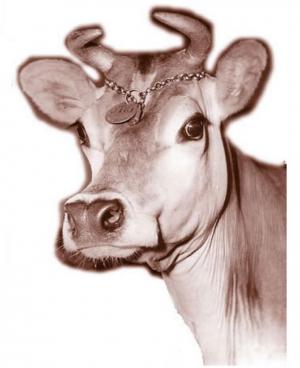 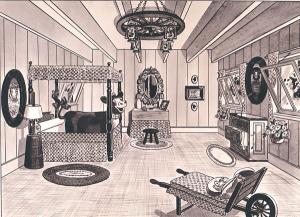 Borden milked "You'll Do Lobelia" for every quart of PR she could deliver.Comments, letters to the editor and poems poured into newspapers wherever Elsie hit town. One hypercritical observer penned "Elsie Ain't a Lady"... 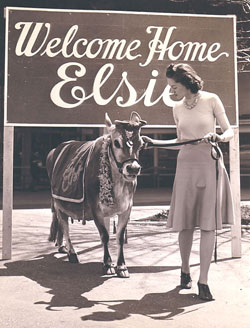 Elsie is a lovely creature,
In every graceful line and feature,
But always from her upturned nose,
The slightest bit of moisture flows,
You'd think that after licking salt,
She'd realize this social fault,
But, no, not Elsie --- 'neath her hide,
She's just another cow inside! 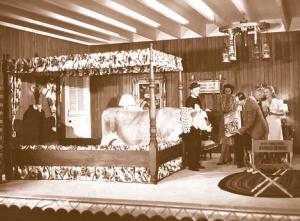 In Hollywood, she was welcomed by a brass band and such luminaries as Kay Francis, Spencer Tracy, Frank Sinatra and John Wayne. During the welcoming speech made by Miss Frances, Elsie seemingly tried to steal the spotlight by stepping on the well-known actress' toes. Elsie's manager and traveling companion Lee Boyce (who fed and raised her on the finest grasses back in Brookfield) repeatedly kicked the cow in the shins but without results. After the actress squealed once and again with pain, Boyce realized that he had been kicking the wrong shin! Both actresses regained their composure and continued with the festivities.

Thanks, Elsie, for putting Brookfield on the map!